Bramley Baths re-opens ahead of schedule!

Community-led Bramley Baths will become one of the first swimming pools in Leeds re-open; four months after closing its doors due to the coronavirus pandemic. 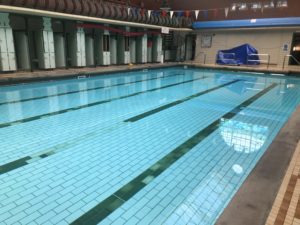 The swimming pool is set to re-open with a reduced timetable on Monday, 3 August.

People who supported the Baths through lockdown by joining the Friends of Bramley Baths, have been invited for a free swim and an opportunity to see all the safety measures put in place to keep everyone safe while they are accessing the building and using the pool.

Bramley Baths chair John Battle thanked the volunteer board for stepping up and redoubling their efforts during a period of uncertainty. He said:

“As the leader of the first campaign to save the Baths, I have seen it go from strength to strength. We had established a really successful, friendly, popular Baths, and then the pandemic happened. So I am doubly pleased that due to the commitment of everyone at the Baths and the loyalty shown by our Friends and members, we have pulled through and saved the Baths a second time.”

“We are absolutely delighted to have reached the point at which we can offer this beautiful, historic facility to the public once again. It has been a long hard struggle financially, and the Board has worked hard to keep us financially afloat.”

“It’s been an interesting first month in the job for me! Although I wasn’t quite sure what to expect, I found I was working with people who had tremendous enthusiasm for the Baths and in my first few weeks we have been able to put in place important steps to keeping the public safe and we are now able to open ahead of our original target date.”

Full details of the timetable and how to book can be found here.