A fellow Mumbler had been looking for a “different” party for her teenager son, find out why a Stockeld Laser party ticked all the boxes!

My 13 year old son wanted a birthday party. Too cool for most things like laser quest, bowling or the cinema, yet still too young for your typical stag party type of day out, I found a happy balance with the Stockeld Park Laser party.

We hosted 15 boys (aged 12 and 13) on an extremely wet and cold day. Arriving at Stockeld and believing it might have to be cancelled due to bad weather we were apprehensive. Thinking our best case scenario was going to involve a lot of mud, we were really pleasantly surprised.
Even in the pouring rain the laser arena was not boggy underfoot thanks to all the chippings and forestry and it felt quite sheltered under the trees. 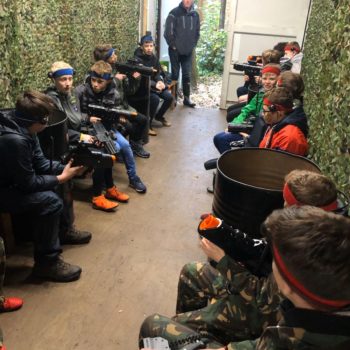 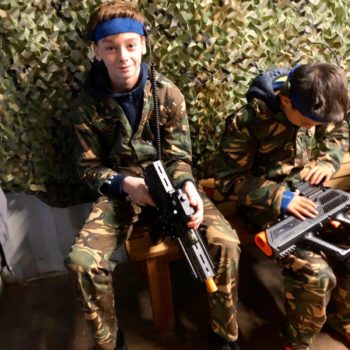 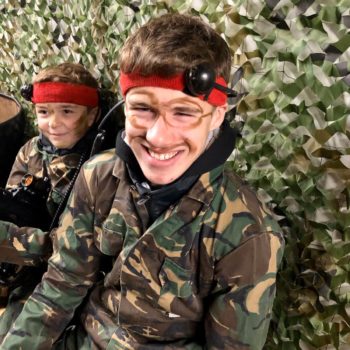 Our hosts Emily and Elliott were great with the boys, very friendly and enthusiastic. They helped by quickly organising them into a green shelter where 2 teams were created, a short health and safety briefing was given, as the laser guns were handed out.

Emily then offered camouflage face paint and found camouflage overalls for those that wanted them. As you’d expect, some boys weren’t so keen and there was no pressure to dress up.

Very quickly we were taken out into the arena which was a large outdoor space filled with shelters, tunnels, tyres, dugouts, pipes, abandoned vehicles and other interesting features. It felt like a grown up ‘paint balling’ environment with lots of space to explore. 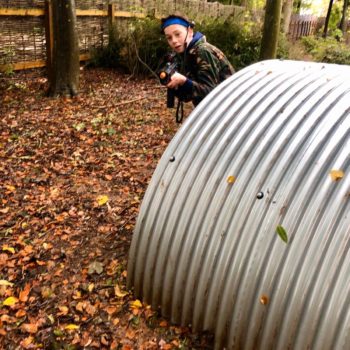 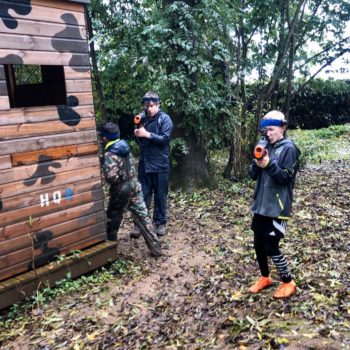 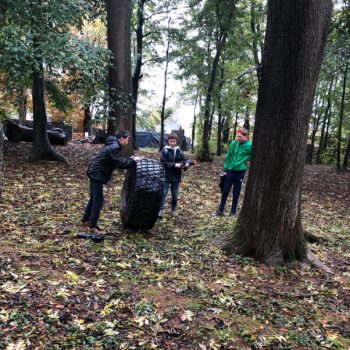 Our hosts, Emily and Elliott, wasted no time setting the teams up for 3 x 15 minute games where the aim was to enter their opposing teams base and fire at their target.

The games ran smoothly, lots of laughter, shouts of ‘go go go’ and ‘watch yourself’ were heard as they began collecting ‘hits’ and ‘kills’. It was all very competitive but lots of fun too. There was a couple of technical hitches with guns not firing initially however these were fixed on the spot and a quick reset sorted the problem promptly.

Following the 3 games, our group of boys gathered in an outdoor shelter to enjoy freshly made pizzas. They looked and smelt delicious. There was 1 pizza between 2 boys and as we had hungry tween/teenagers this possibly needed to be a larger spread. I should have added chips or a couple more pizzas to the order. After all that exertion the food vanished very quickly. 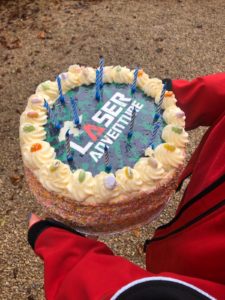 We opted to have a Stockeld birthday cake which looked amazing. Due to the still hungry nature of the boys this was also eaten on the spot. I didn’t get to try it personally but the reviews from our tribe was very positive!

Apart from the lack of food planning (our fault!), if I could add anything further that could have improved our event, then a debrief, results or takeaway from the games would have been nice.

Overall, we were extremely happy that the event still went ahead despite the weather and resulted in 15 very happy boys including our birthday boy.

If you’re at that ‘awkward’ age stage then this is definitely a good option. Stockeld can accommodate different styles for different ages plus there is a lovely shop and cafe available onsite to keep bored parents happy whilst the kids play.

We will be back again.

For more details on the Laser Adventure at Stockeld Park visit www.laser-adventure.co.uk or email laser@stockeldpark.co.uk